A few days in Paris

Arrived in Paris on Monday the 28th of April after a transfer in Amsterdam. When we arrived at Charles de Gaulle airport we found that Robin's suitcase had missed our transfer, which was quite short. We went to the luggage department and we were looked after by a wonderful French lady from Air France. In the usual French manner, she shrugged her shoulders and told us that KLM ( a partner of Air France) simply caused them a lot of problems. She did say that due to the short transfer, that it was very possible that the suitcase would be on the next flight which was in 1 1/2 hours. She went on to enter the required information into the computer and after about 5 minutes, I said to her in French that it was amazing how much information was required.....she laughed and indicated by the time she was finished our luggage would probably be on the carousel. When she found out that we were headed to Nice in 3 days, she said that if the luggage hadn't arrived by the time we left Paris, she would be willing to deliver it there, as she owned an apartment in Nice. Sure enough, we went for coffee/tea and came back and the missing suitcase was there. A different start to our 21/2 months away!
It was interesting to see goats grazing at the Charles de Gaulle airport. They keep them in fenced in grassy areas around the airport.....guess this saves on paying someone to mow the lawn. Wonder how our neighbours back in Calgary would feel if we got goats instead of hiring a neighbourhood kid to mow! Thinking about it, sounds like a good idea. The goats would keep the grass "mowed" and also provide fertilizer. I guess the only question is....who would pick up the mail?
Arrived at our hotel in the Latin Quarter about 2 p.m. Quickly freshened up and headed off for a nice long walk along Boulevard St. Germain, one of the famous streets in this area. This is the third time we stay in this hotel, so the area is very familiar. Always nice to see how the neighbourhood has changed...some shops closing and others opening. 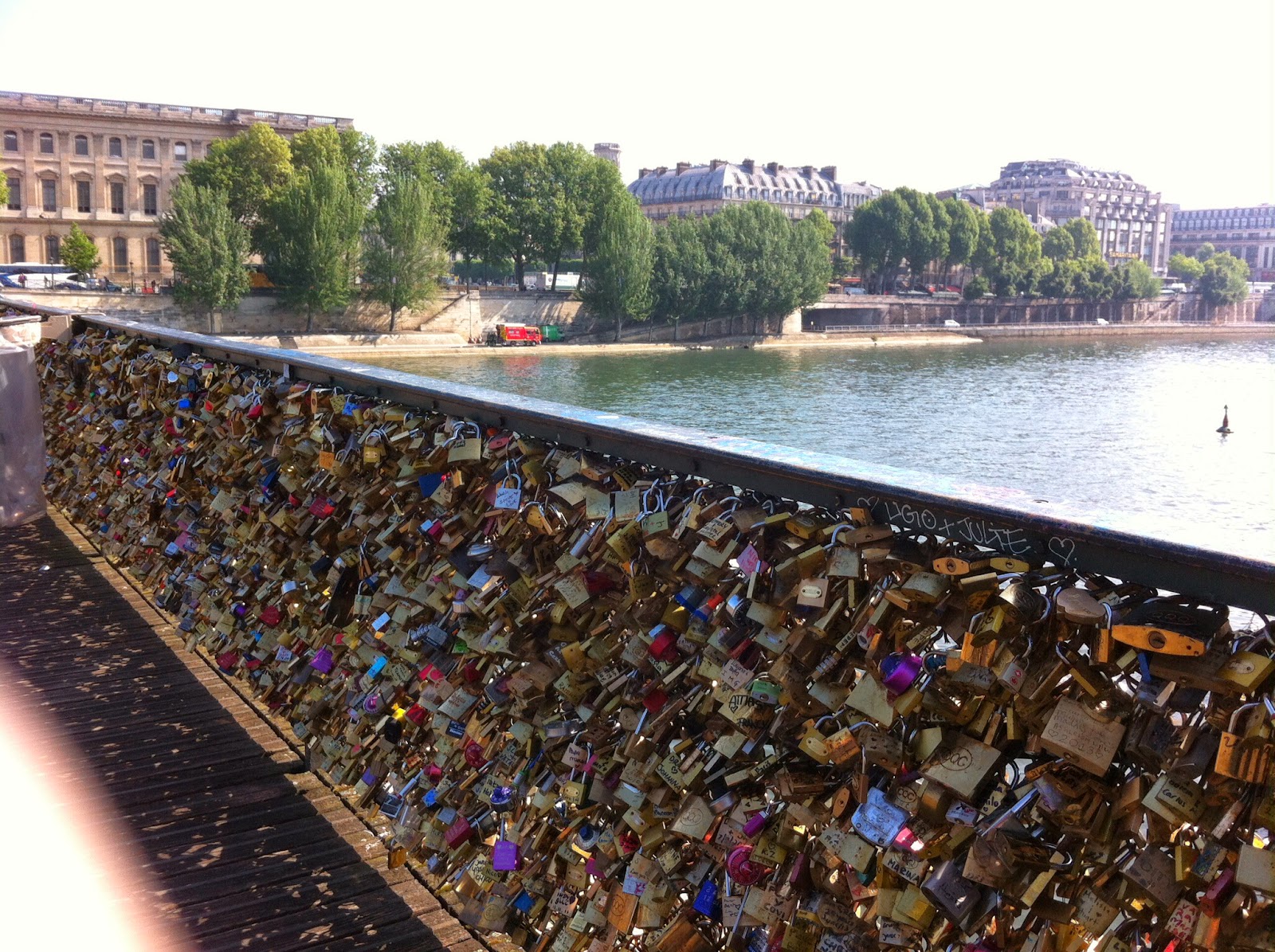 Some of of early observations of Paris...
1) Still lots of people begging. We commented last year that the people begging were now accompanied by dogs. We now note that a few of them are now using cats as companions to pull at people's heart strings! Gotta change things up to keep people interested.
2) Always get a laugh at "rules of the restaurants". We stopped for a glass of wine at a bistro . When we looked at the price list, it made more sense to order a half carafe....hey we're on holiday. We were told that you could only order a 1/2 carafe if you had a meal!
3) Continue to be amazed at the chocolate shops. One can't walk more than a couple of blocks before seeing yet another chocolatier.....needless to say we had to stop and sample. What else to have but some dark chocolate with a glass of red wine.
4) We know we are back in Paris when throughout the day and night you hear the "klaxon" (police car horns). A very familiar sound.
Early dinner our first day and very early to bed.....fifteen hours of sleep. Probably more than in the past. We did not sleep well on the flight over as many crying children which kept us awake.
Off for our full first day of touring in a Paris. Breakfast at a local favourite restaurant. Then walked across the Seine, viewing the many "love locks" on the Quai de L'Archeve. An article in the local paper indicated that some see these locks as an eyesore. I must say that the number of locks has greatly increased over last year. They have started putting locks on some of the other foot bridges and it is said that that the local government is cutting them off, as they are trying to ensure that this phenomenon is kept to certain bridges. They are also going after the local touts selling the locks.
We continue to "The Marais" an area in the 4th and 5th arrondissement. We really have not toured in this area in previous trips. What a lovely area to discover. So many interesting shops....papeterie, purse shops, artisan cheese and chocolate shops, designer clothes for both man and women, great restaurants, shoe stores, etc. We also ventured into Village St.Paul near here, but not as developed....they are a wanna be Marais.
Spring is definitely in Paris. The trees are in full leaf and bloom. Roses are blooming as well but the lilacs and tulips are already past their prime. We have had a few rain showers in our first day here, but nothing significant. Weather about 16 degrees C. very nice for walking.
In the afternoon we continued back to the Left Bank and wound our way to the Rodin museum. The museum is undergoing some restorations, so only a few of the viewing galleries were open, and there was quite a substantial wait, so we decided to visit the gardens. In all honesty this was a wise choice. The numerous statues in the gardens were impressive. Started sprinkling rain just as we finished our tour of the garden. A 40 minute walk back to our hotel. We walked a total of about 6 hours today, excluding stops for coffee and people watching. The people watching is always amusing...a variety of cultures, styles and interesting attitudes!
Another great day of sightseeing in Paris on Wednesday. Weather about 18 C today and no showers, very pleasant. Probably walked for some 5 hours today. Spent today in mainly touristy areas, amazing the crowds everywhere. Lots of school groups everywhere we went today.
Headed to the L'Orangerie Museum, one neither of have seen in part visits. It is located at the north end of the Tuilleries Gardens. The main rooms of this museum are devoted to Claude Monet's Water Lillies. He donated these paintings to the French people after the First World War so that they could have a space in which to feel peace. Unfortunately one is not allowed to take pictures in these galleries. Two full viewing rooms are put aside for the Lillie's, quite spectacular. Museum also had collections of Renoir, Cezanne, Rousseau, Modigliani, Matisse, Picasso and a few others. I must say that the size of this museum is quite small compared to some of the more popular museums (Orsay, Louvre, etc.), therefore not as overwhelming.
Then decided to stroll through the Tuilleries Gardens making our way to the Champs Élysées. Hard to believe that this is only the end of April, the number of tourists is unbelievable; wouldn't want to be here in the height of the season! Back to the first arrondisement and visited the Grand Palais gardens which is located a few blocks behind the Louvre. What a lovely quiet space to spend some time reflecting on what we have seen in the last couple of days. The majority of people enjoying these gardens were locals, we even saw two separate groups of men playing boules.....why no women I ask, I lawn bowl!
Heading off to Nice tomorrow (Thursday, May 1st) on the TGV (high speed train) which will take 5 1/2 hours. We enjoyed our time in Paris visiting familiar sites and discovering new areas.

Posted with Blogsy
Posted by Robin and Claire at 10:11 AM