Some observations of every day life in Nice. We certainly have noticed what a diverse population comprises this port City. Very noticeable the amount of Arabs and North Africans. With the Euro zone came an influx of East Europeans as well. When walking along the Promenade you can always be assured of crossing paths with an Arab man on his bicycle with his radio blaring away the latest "Arab music" at a decibel level that you simply cannot miss.....are they trying to convert us, I mean to their music! Also....where are the Arab women? This isn't meant to sound racist or feminist... simply an observation.

As I mentioned in an earlier blog, we went for a hike the first weekend we arrived with a group of expats. In discussions with the various people on the hike (ages 28 to 62) I was told that the hike was organized by the expat club which is part of the "Meet Up" website. Those of you who know my curiosity and my love of the Internet (except Facebook!) will know that I delved into Meet Up. Wow, what a great way to meet new people if you move to a new City/area. The local Nice and area meet up website has groups such as the expats, a camera club, book club, hangout in Nice, a ski club, yoga, business clubs and on and on. We also joined the expat group for a day in Monaco for the 9th Grand Prix Historique of Monaco....more on this later. Having said this is a great way of meeting people, mostly ex-pats, one is not really assimilating into the French culture, language, etc.

The number of people smoking has not decreased, but you see more of them smoking electronic cigarettes. Last night while walking along the Promenade we came across two young Arab men smoking their hookah pipes, small enough that they could carry them, sort of like a coffee to go, this was hookah to go!

We get a kick out of parking practices here in Nice and for that fact in a lot of France. You see vehicles double parked all the time. The normal practice is that if someone is blocking your way, you simply honk your horn, sometimes for several minutes, until that person blocking your way comes out to move their vehicle. At times, the person will leave their cell phone number on their windscreen so you can call them to come and move their car. Seems to work.

Love some of the French expressions..."Bonjour Monsieur/Dame" when you walk into a restaurant or shop..."Je vous ecoute" (I am listening) when you are ready to order your meal. Others such as "de rien" or "Je vous en prie" which both are a reply to when you thank someone, their reply basically means "no big deal, your welcome". 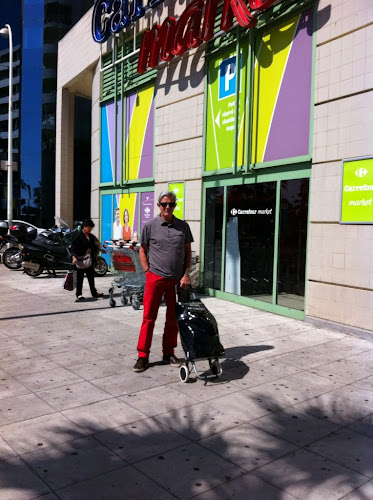 Watching the local BBC news, the latest story is the Eurovision contest (think of American Idol, but way bigger). This year the finals are in Copenhagen. The winning country hosts the finals the following year. This contest has been happening since 1956 among European nations; it started after the war to unite European nations. Previous winners include ABBA, Julio Iglesias and even Canada's own Celine Dion who sang for Swizerland. The biggest news was in the quarter finals which included twins from Russia and a female singer from Ukraine...lots of interest in this one of course due to geo-political concerns in Crimea....the Russian twins won. The finals are taking place this weekend. Update, the winner was Conchita Wurst from Austria.....a drag queen who sports a beard....look it up...really! 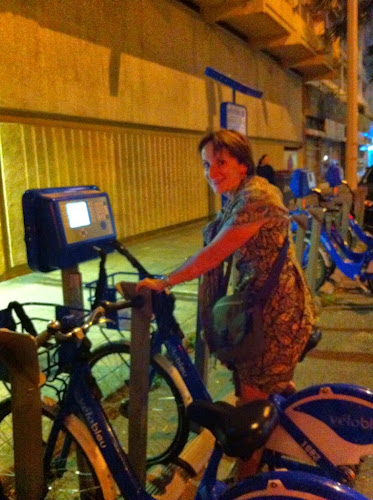 Walked 45 minutes into town on Friday night for dinner. After a lovely meal out, we were too tired to walk home, cabs cost a fortune here, bus schedules are minimal at night, so we decided to hop on the Velo blue to come home. Good thing they have step through frames as I was wearing a dress! These bikes are great to get around the city, but a fair number are crappy. On occasion we have stopped at another bike station to switch out a bike, which we did on Friday night. At least the lights work, so not worried about riding in the dark.

On Saturday the 10th we attended the 9th Grand Prix Historique of Monaco with the expat club. Sixty people in total and the English woman who organized it, did a fantastic job. We went by train from Nice, and as soon as we exited the train station you could hear the roar of the engines. Stopped at an outdoor cafe for coffee, then wound our way to our seats which backed onto the Port of Monaco. The track they use is the same as the Formula 1 Grand Prix which takes place in two weeks. We saw a total four races which included pre 1940 Voiturettes and Grand Prix cars from 1952 onwards. Our English host had also organized a lunch including, of course, lots of wine. Robin and I headed back to Nice in the late afternoon, but we are certain many stayed behind to party late into the night, including our friend Ken! 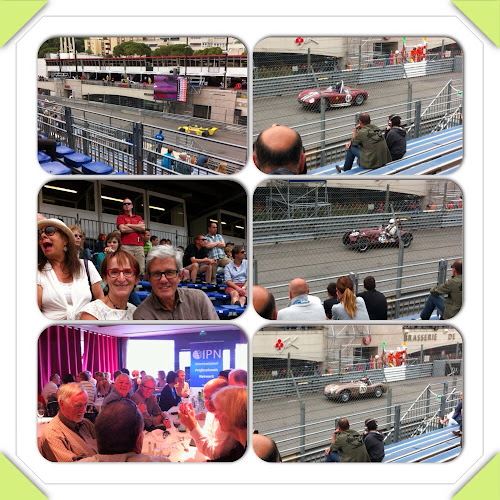 Well folks....just a little rant on my part. Robin and I have been listeners/readers and watchers of the CBC for years and we follow CBC while travelling. The CBC is one of the icons of our wonderful country of Canada. Saddened to hear of the cutbacks that were announced last week and sad to see people like Lyndon McIntyre, Nancy Wilson and Allison Smith leaving this institution which has been looked up to by other countries. Lyndon gave a very moving interview on Friday morning and Jian Gomeshi's essay on Friday morning was excellent. Those of you who care about our public institution should speak out. O.K, enough said.

Local newspapers of late have been filled with talk of Monsieur Hollande's (President of France) popularity ratings, or should I say lack thereof. Most people will say tht he has had a lacklustre performance so far and any hope they had that he might change things has evaporated. A funny editorial comic in this mornings paper shows a PR director saying to Hollande...." Your popularity ratings have dropped to 18%, Hollande says "mais non" as he holds the sign upside down to show 81%...!

Monday the 11th of May and we decide to take the train to Frejus, a medieval walled town situated on the coast. The town is known for its local artisans. When we arrived, we found the local tourist office and the young gentleman told us it was a pity we chose a Monday to visit as all the museums and local landmarks were closed on a Monday...o.k....maybe didn't do enough research on this one! We decide to walk around the quaint town and find a signpost directing down an alley where some artisan shops are located. As we are walking down, all of a sudden we hear what sounds like a canon going off. A lot of towns have a noon canon, but we look at our watches and it is quarter past noon. Next thing we hear are the sounds of whistles/piccolos/fifes! Well guess what...a local celebration/parade coming our way with the townspeople dressed in period costumes and many of the men dressed in many different types of military costumes which covered many historic periods. Once they stopped on the pedestrian street, they began shooting off their various muskets and guns. Not sure why the young man at the tourist bureau didn't mention this, but very glad we came across it. Got some great pictures and as we were standing there, I asked a local policeman what this was all about. He indicated that it was a local town celebration. Stopped for lunch at a lovely cafe in the local square and the owner told me the celebration was called "Bravade". The townspeople are wearing their best ancient dress and in a "bravado" fashion showing off the old military might. They are thankful for St. Francois de Paule who through his prayers saved the town from the "petulance/plague". Did go back to the tourism office to find out more about the celebration.....sorry, closed between 12:30 and 2:30p.m. I guess tourists shouldn't need anything between those hours. Having said this, it is a rarity nowadays for shops in tourist areas to close at these times, which was practice in earlier years. However, one still has to ensure you purchase what you need before 11:30 if you are in a small town, as the shops do indeed close over the lunch....but really, the tourist office! 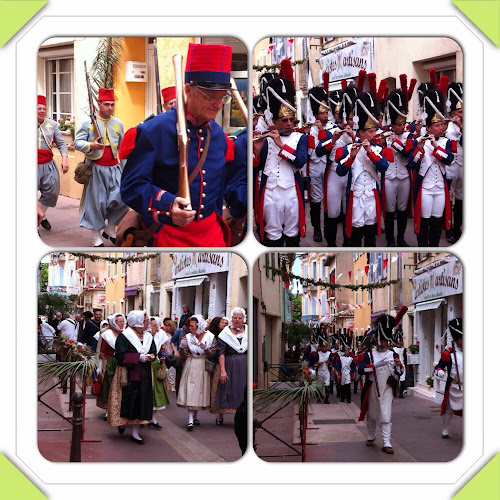 After this lovely happenstance, we then took the bus to the port and adjoining town of St.Raphael. At the bus stop I asked a very lovely older French woman, if the number 6 went to the "Gare" in St.Raphael. Not only did she confirm this, she went on to tell me that the 6 went around the port, but if we wanted to see more of the town, we could take the 7, which did a circuit through the town. Once we got off at the Gare, I turned to thank her, and she pointed in which direction we should go. We always run into people who are very friendly, but must say it helps when you speak the language.

I try to encourage English speaking people we have run into, to make the attempt. A good example is an Ozzie couple we met at the bus stop were telling us that they had asked the previous bus driver for assistance, but no help. I told them which bus was going to the Gare and we were going there. Lo and behold, guess who was driving the next bus, you guessed it, the same guy who wouldn't help them.....mind you the Ozzie didn't help himself either!

Spent about one hour in St.Raphael before taking our train back to Nice, then bus back to apartment. We continue to appreciate the fact that we can get to so many towns and villages around Nice by train and bus, which are for the most part very clean and run in a timely manner. Certainly don't need a car here and wouldn't want one with all the double parking going on!

Our lunch today in the village of Frejus was so delicious. Something about the way the French cooks use sauces, dressings and oils; none are overpowering, simply delicate tastes. Ordered a cappuccino after lunch and it came with "chantilly" (whipped cream)....o.k., a little indulgence...o.k. O.K. had one in Paris as well! Hey, my pants still fit!

We try to take a trip to a nearby village every second day or so. Wednesday, the 14th, decided to take the bus to the nearby ancient walled town of St. Paul. We had visited here last year and it was on our "go back" list. The town is known for its local artisans whose shops are in the tiny winding streets. Each shop has lovely signs which I thought were all so different and each one very unique. Spent the afternoon in St.Paul and Bus back to Nice.....oh! forgot to mention that there is a lovely knife shop in St. Paul. Some of you will know that pocket knives are one of Robin's weaknesses....he has a hard time walking by a knife shop without stopping, and usually, without buying! Yes, we will be bringing another knife home. 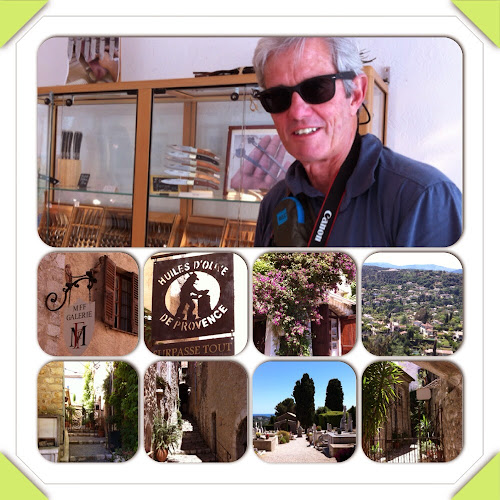 Posted with Blogsy
Posted by Robin and Claire at 8:51 AM