Arrived in Nice on Thursday, May 1st by TGV from Paris, which took 5 1/2 hours. Very relaxing way to travel. We rented the same apartment as when we were here last year, so almost feels like a second home. May 1st is a holiday in France as in a lot of countries around the world, celebrating "La Fete du Travail" (Labour Day). Most businesses are closed and in Nice even the local buses don't run. As someone told us, " " if it wasn't for the Arabs one wouldn't be able to buy groceries or wine", so we dropped by the local Epicerie to buy a few things for dinner. A custom on this day, dating back to the late 1700's, is for one to give loved ones a bouquet of "Muguets des Bois", Lily of the Valley. The bouquets represent the new season and new life of spring.

Our aim for our first day in a Nice was to buy a French "shopping cart" (pretty exciting!), our passes for the Velo Bleu (the local bike sharing system), and bus tickets. We head out and who do we run into just two minutes from the apartment......Ken!

For those of you who read our blog last year, Ken is the local handyman who lives in our building. He is a Whelshman and has a wonderful sense of humour. Last year we spent a couple of afternoons at the pub enjoying a few drinks while watching football with him (soccer for our North American friends). We went for coffee with him and got caught up on what he has been up to. Married and divorced twice, he decided to semi retire in Nice 21/2 years ago and he has many lady friends. Well after a half hour we have already arranged to go to an antique car race in Monaco with Ken and some of his friends in a couple of weeks as well as hiking on Sunday.

The Historic Grand Prix of Monaco exists since 1997 and is held every two years, 2 weeks before the F1 Grand Prix of Monaco. It takes place on the same circuit as the Formula 1 Grand Prix with the charming old cars that propose a travel back in time. There are 7 races which include Pre-war "Voiturettes" and Grand-Prix Cars dating from as far back as 1939. We are told it is an all day event including a dinner and wine (of course) concluding with a train ride back to Nice. Looking forward to it.

Found our "French shopping cart", bought the necessary items to stock our apartment, then headed to the Velo Bleu offices. There are 175 bike stations in Nice and the neighbouring towns of St. Laurent de Var and Cagnes sur Mer and a total of 1,750 bikes. We paid €10 each for the use of the bikes for one month. The first 30 minutes are free with a charge of €1 for each additional hour thereafter. Last year we made full use of the bikes and only had to pay additional costs on a few occasions. A great way to get around, although we still plan on doing lots of walking as we did last year. It takes us about 40 minutes to walk into the "vielle ville", the old town. After our errands and a few stops for coffee and people watching along the way, we returned to our apartment late afternoon. Some showers, but nothing substantial. Must say that it is much greener in Nice this year over last. The trees on the boulevard in front of our apartment are in full leaf. Last year after a month here, they were just starting to green up. We are told by one of the locals, that Nice experienced a very wet winter and spring arrived early. Nice to see all the greenery.

Enjoying a quiet evening at home with a glass of wine, watching the BBC. OMG.....the headline is about Rob Ford (the wacko Mayor of Toronto)......really! Thankfully, the news moved on.

Walked to the old town today (Saturday) for the first time. Stopped along the way for Pissaladiere (caramelized onions, olive and anchovies on flat bread) and socca (chick pea crepe), both of which are specialties of this area, the Nicois region. There are several cafés in the old quarter which specialize in Nicois cooking, a couple in particular must be written up in guide books as they always have line ups. You order at a counter (limited menu, just about five Nicois specialties) then you sit at shared picnic tables. Today we met a Scottish/Irish couple here for the weekend and had a chat about the oil industry in both Alberta and Aberdeen, where they both work. Lots of walking so jumped on Velo Bleu to ride home along "The Promenade des Anglais" right along the sea.

The Promenade de Paillon, which is a lovely green space between the downtown and the old town, is finished. Last year when we were here, it was being fully refurbished. It took 2 years, cost 40 million Euro and covers 30 acres. What a magnificent job they have done, beautiful gardens, resting areas, fountains, sculptures and a children's park.

Out for dinner to a favourite restaurant in Nice, Oliviera on Saturday night. Our son had told us about it last year and we enjoyed it so much, worth a return visit. This business started off by selling olive oils and eventually grew into a restaurant. They serve different olive oils with each dish, even including desserts.The menu, which is limited by the fact that they only offer what us fresh in the local area, indicates which olive oils will be served with which dish....like a wine pairing. May sound a little weird, but simply fantastic tastes! Just to make your taste buds salivate, we started with a zucchini flower salad....what can I say, absolutely delicious. The zucchini flower is probably 5 inches long and was stuffed with fresh tomatoes, aubergines, zucchini, peppers and fresh garlic. Robin had a mushroom lasagne (very earthy) and I had the rabbit. Finished off by sharing a tiramisu served with olive oil..yummers! They only take cash here....the owner says "My arrangement with the Bank is that I won't do credit cards and they won't do olive oil ".

Sunday arrives and we were invited to go on a hike in the mid Alps in La Vallee de la Vesubie with our friend Ken and his local hiking group. The hike was supposed to be a 5 hour circuit but turned into 7hours...yikes! The tour leader got lost several times, we ended up hiking through logging roads which were pure muck, found the trail, had to hike back up, got lost again, hiked back up, lost the trail, then down to find the trail.....geez! Did stop in a tiny little village called Peira-Cava for coffee, possibly should have asked someone for a ride back to our car! Finally got back to Nice around 8 p.m. Notwithstanding the challenges of the day and the fact that Robin's knees took a beating, we had a good day and the scenery was spectacular. 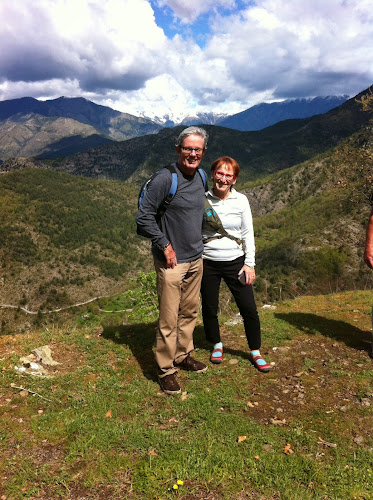 A couple of days just hanging around Nice taking it easy. Bus to Beaulieu sur Mer to enjoy their beach one day as it is a sandy beach as compared to the beach in Nice which is very rocky.

On Wednesday, May 7th we took the local train to Grasse, a town known for it's perfume industry. The town dates back to the 11th century and was fortified at one time. Medieval towns were built in hills so they could have a vantage point against any invaders. Yes, you guessed it, the train station is at the bottom of the hill. A sign indicated that the town was only 350 steps away....o.k. Well guess what, walk a couple of blocks then up 150 steps, go through a tunnel, then up another 50 steps, around a corner, up 50 steps, turn left walk a block then up a final 100 steps! The bus from the train station cost €1.50, but this way was much better for our cardio exercise for the day. Simply love this old villages...the winding narrow streets with local artisans selling their wares. The church was our first stop, although not grandiose, it was very welcoming. It was filled with baskets of roses everywhere one looked, also a good number of paintings, including a Rubens. We visited an art museum with works of 18th century painters of the area along with an exhibit of photographs of Asia dating back to the early 1900's. Next we visited the Provençal costume and jewellery museum (18th and 19th century) and finally the Fragonard perfume factory, museum and shop. Fragonard is the largest of the Perfume makers left in the area. A tour of the factory, which still operates today was very interesting. The process is very time consuming and one could relate it to wine making. We were told that one has to study for two years at school followed by eight years of practice. A good perfumer not only has a good nose but most also possess a sense of fantasy. This is a trait that helps one create new scents. As Robin said, " Now we know why perfume costs so much". 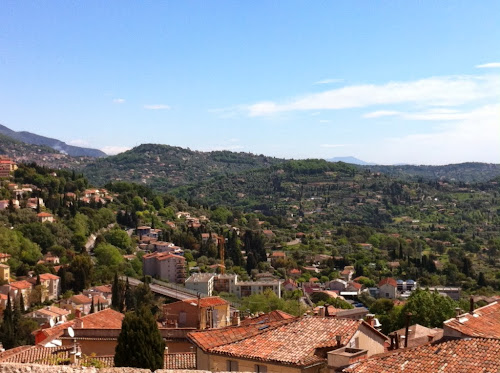 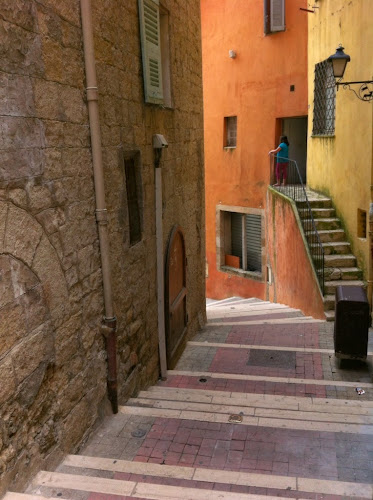 Posted with Blogsy
Posted by Robin and Claire at 12:33 PM