Took the train to Cannes on Tuesday the 21st of May and all of a sudden, five policeman with a large Muzzled German Shepherd came through the train cars, must say a little unnerving. We thought this was possibly due to the film festival. Quite busy and many tourists and paparazzi as the Cannes Film Festival is on. A lot of the beach areas along The Croisette (their Promenade) were closed...sorry didn't see any famous stars, but in all honesty really didn't care. Cannes really doesn't have the same character as Nice, perhaps due to the lack of an "vielle ville -old town". After lunch and a bit of walking around we returned to Nice.

A few days before we left to go to Prague, we attended a quiz night at one of the pubs in the old town. We attended this through one of the "meet up " groups called "Hang out in Nice". Believe I mentioned in a previous blog entry that we met a young American woman when we went hiking. Since then, we have run into Jenny a few times. Well, Jenny was at the quiz night so she joined us as well as a young couple who had just moved to Nice from Holland (for work). The five of us formed one of the teams competing for prizes. We had to answer 15 questions, then took a break, then another 15 questions. Well folks, after the first round, our team was.....dead last! Having said this, during the first round Jenny managed to win two free drinks with a couple of quick answers to pop questions. Additionally during the break, a screen showed 20 bobble heads which each team had to identify. Although our team came in second last at the end of the evening, we were able to identify all 20 bobble heads and won a free bottle of wine. Our team decided that the young couple from Holland should take it home, so they were very happy. Bikes back to the apartment...home around 11:30 p.m.....way past our normal bedtime! A great fun night out. 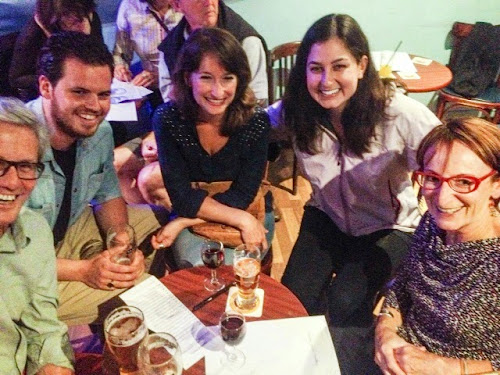 Should mention that Jenny (sitting next to me in picture above) told us she had been to Cannes the day before, she was hoping to see some famous stars. She was quite excited because she thought she saw Quentin Tarantino, at least she thinks it was him, as she only saw the back of his head! She told us that she googled "back of Quentin Tarantino's head" when she got back home. We had a good laugh about that.

We have come to realize that the Promenade des Anglais becomes a stroll for the "Ladies of the evening". Now we thought this was only late at night as we had noticed them on the few occasions when we have come back later in the evening. Well.....I don't want to sound like a prude, but....the day we were leaving for Prague, we went out for a short walk along the Promenade. Coming back, we crossed the street and walked back along the residential side and my eyes couldn't quite believe what I saw. A hooker with the shortest dress I have ever seen someone wear with half her butt sticking out...yikes...not even sure she was wearing underwear, but I couldn't look! Oh well, makes for good discussions. Our friend Ken says the young ladies always wave at him, but he just laughs and walks by.

As we were walking into town one day along the Promenade, we came across what we thought was a political rally. Many groups walking down the road, escorted by police, all groups carrying different banners and wearing various colours. Found out later in the afternoon that this was a one day general strike by Government workers which affected flights from Nice. Glad it happened on Thursday and not Friday, when we were due to leave for Prague. These general one or two day strikes seem to be a regular occurrence in France. Last year the air traffic controllers went on strike for 3 days, which they announced ahead of time. That strike did affect travel plans when our Sister in law, Brenda was due to meet us. She had to spend a night in Amsterdam before meeting us in Toulouse after the strike was over. It is always an experience going through security points in airports. Here in Nice last week, I even had to take the pen out of my purse and take off all my jewellery. Doesn't seem to be any consistency in the world regarding security requirements in airports. At least this makes it somewhat interesting. Oh well, the joys of travelling!

I love to notice everyday life no matter where we are. I must say that the French are always very discreet when using their cell phones in public places. Much appreciated after being in places, even in our home town, where one is subjected to hearing strangers conversations on cell phones.

The latest news in France is the debacle of the French train authority. They just ordered and received several new trains. So, they go to test them and realize that the new trains are wider than the old trains, therefore they do not fit into the train station platforms. They now have stated that they need to spend 50 million Euros to trim down all the platforms. Wouldn't want to be that CEO or the people who ordered the trains.

On Friday the 23rd we attended the Nice Tennis Open. For those tennis players out there, the Nice Open is an ATP 250 men's tournament. We went last year and really enjoyed it, thought we would take it in again. We saw the two semi final matches which were both good, so a wonderful afternoon spent in a small tennis venue where one is very close to the action. Interesting to see a drone flying over the stadium to take pictures, a few times during the matches. 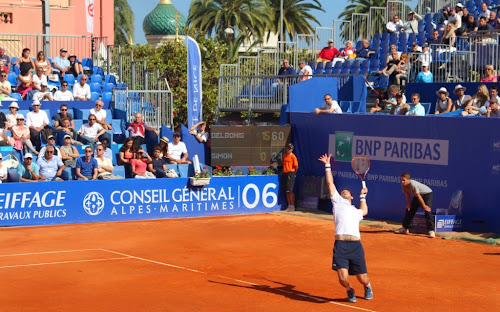 Must be a sports weekend as on Saturday night we went to Ma Molans pub in the old port to watch the Heineken Rugby Cup Final....so Robin tells me. Toulon, the French team won over an English team. Think some of the young gentleman in the pub had been there for quite some time before the match. They went absolutely crazy every time Toulon scored, French cheers and at the end one young man dancing on the table, which the management did not take kindly to. A fun evening after which we rode bikes home around 8:30 p.m., just in time to watch (Robin) the UEFA Champions League final which us football (soccer for North Americans. I tuned out of football to watch a program on my BBC IPlayer app.

At least once while we are in Nice, we splurge and take in some beach time at one of the "beach club". There are several of these along the Nice bay where you can rent beach chairs and umbrellas for the day. They are full service locations with change rooms, showers and restaurants. We chose a perfect day for this. 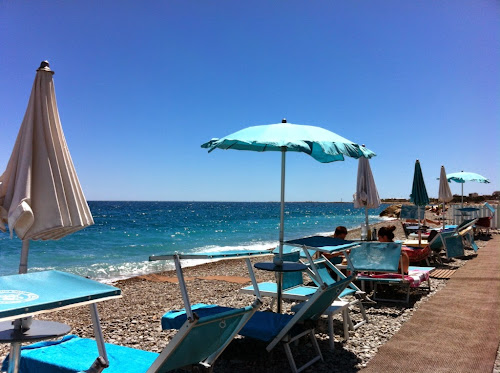 Has been pretty laid back during our last week here in Nice. On Monday our friend Ken invited us to a BBQ put on by one of his friends. Rita, who hosted the BBQ, is a young Hungarian woman mid 30's, and us a entrepreneurial chef in the a Nice area. She had just finished a weekend gig at a private home for the Grand Prix in a Nice. Oh my Gosh! The BBQ entailed more kind of meats than you can shake a "kebab". What a fun evening with a mixture of nationalities and age groups. Picture below is our friend Ken with Robin. 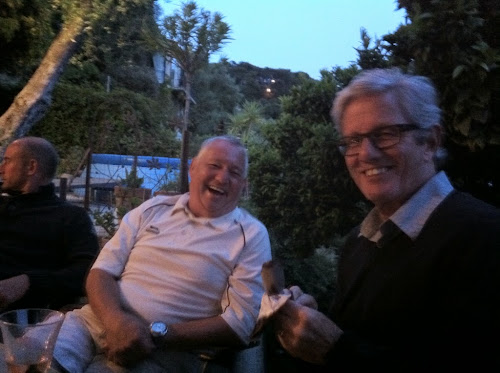 The BBQ was in a Villefranche sur Mer a few kilometres from Nice and up in the hills overlooking Villefranche...wow, what views. 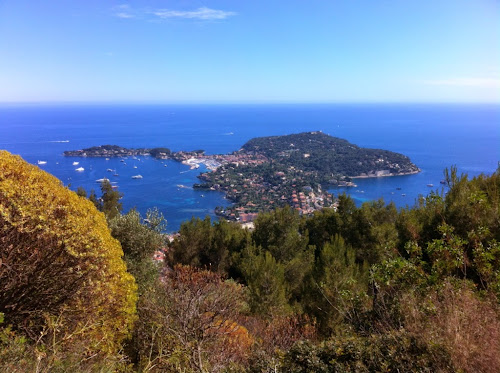 On Tuesday we took the bus to Saint Jean Cap Ferrat. Last year we hiked around the cap, but unfortunately when we got there, the "sentiers -route" was closed as a large sea storm has washed a lot of rocks onto the paths and they were in the midst of cleaning the area for safety reasons. So we walked for about one hour where we could and stopped for our first feed of "moules et frites" ....which were delicious. The cruise boats which visit this area, moor in the harbour at Cap Ferrat. 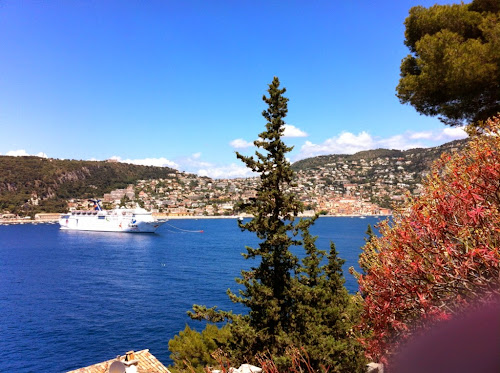 Lots of walking around the city and simply enjoying our lady few days. Decided to enjoy the view and drinks from the a Radisson Blu hotel which is just in front of our apartment. Great views and a wonderful evening. 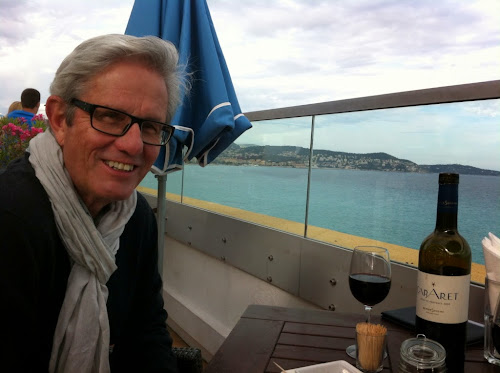 The latest news in this part of the world revolves around the elections held this past weekend for the European Parliament. Pretty scary, as most of the newly elected officials in many of the countries were far right wing who want to abolish the principles of the rights of immigration from country to country, reduce the fiscal cutbacks and protect their own countries from a common market. Well this shouldn't make things any easier for the European Parliament.

Robin and I will usually go out for a walk along the Promenade after dinner. Every night we see lots of men fishing along the beach and they usually have a minimum of 3 fishing poles set into the sand. We never see them catching anything and we often wonder if this is the same phenomena as ice fishing.....simply a way to get out of the house and away from "the wife"! They are also out during the day as well, but more in the evening. They are set up with their chairs, parasols and of course a cooler. Not sure if the cooler is for the fish they catch, yeah right, or the cold beer. 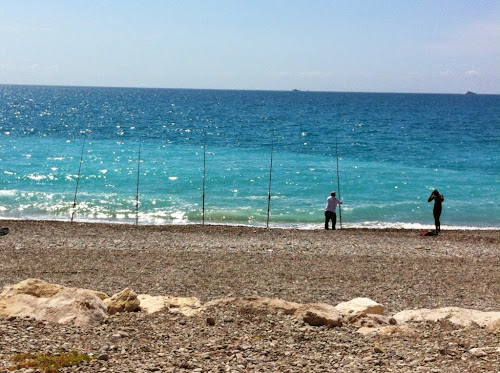 An Italian food festival is taking place along the Promenade as we had our daily walk down to the old town. We stopped to sample some Italian breads, cheese, meats and wine. Quite amusing that here we are in France sampling Italian foods! 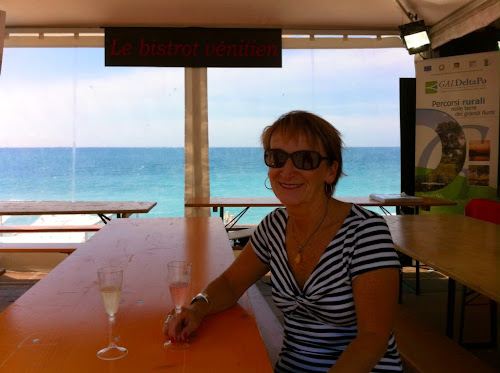 Lots more people in Nice over the last couple of weeks. Tourists disgorging from tour buses all along the Promenade sometimes making it harder to get through...hey we're trying to get our exercise here! Today, May 29th was yet again another holiday in France (Ascension) so lots of locals with their kids out on the beach. That is three official holidays in the month of May...no wonder this country has problems with all it's holidays and strikes!

Out for dinner with our friend Ken and one of his many lady friends. We wanted to thank him for involving us with the local community, which definitely made our month here in Nice delightful and different from a usual holiday.

A picture below of our last day in a Nice, Friday, May 30th. Must say that once again we have certainly enjoyed our month here in Nice. A different experience from last year as we got more involved with some of the local expat community and met some delightful people, experienced local life and made some good memories. Flying to Bordeaux tomorrow for the month of June. Looking forward to seeing family while we are in Bordeaux. 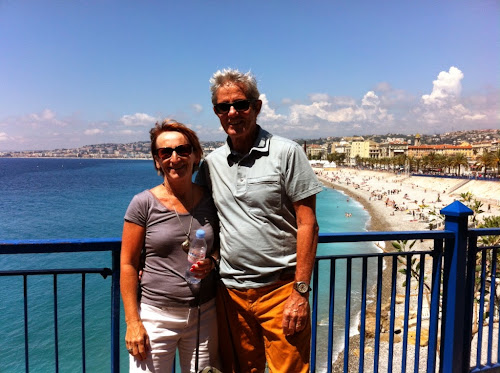 Posted with Blogsy
Posted by Robin and Claire at 8:18 AM